A Correction is in Order 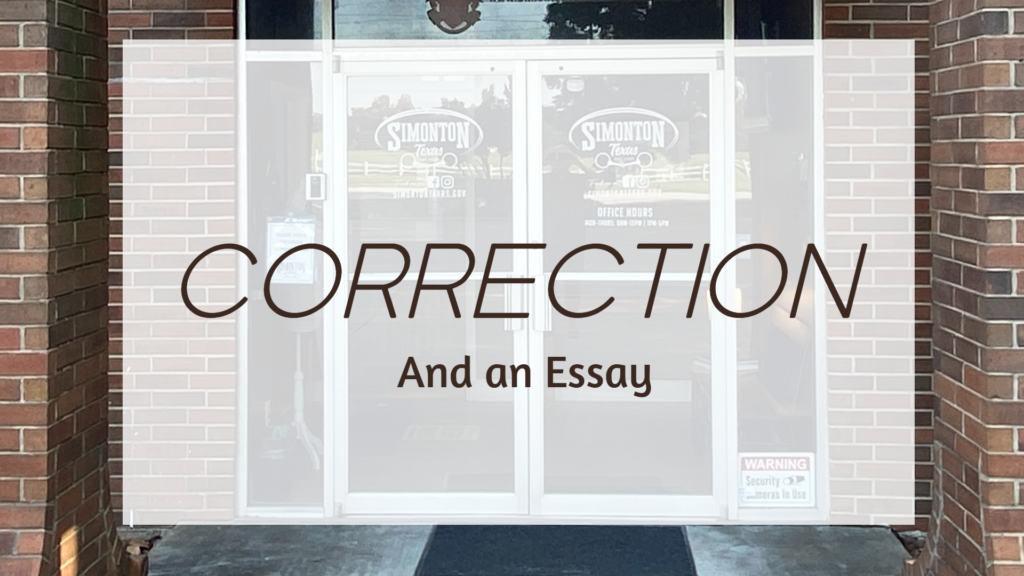 I want to correct something I said at the September 20th City Council meeting. Here it is:

“The City of Simonton, being a “small taxing unit” is, indeed, exempt from holding hearings as was stated by the City Secretary.“

It was an honest mistake, based on my reading of the Texas Local Government Code, and I stand corrected.

But that alone does not change the fact that:

I won’t be surprised when the City claims that they didn’t have to follow the law on these points as well.

In trying to learn more about the City’s defense for not calling their meetings “hearings”, I discovered something surprising. Well, maybe it’s not surprising considering how the City approached this year’s tax increase.

My point?
You may have noticed that the City’s budget would bring in EXACTLY $499,999.

That’s an odd number, isn’t it?

Simple. The City decided to go for broke and raise as much tax revenue without hitting $500,000. They were very careful to stay just $1 shy of a very important number.

Because, by staying under $500,000 and keeping their tax rate under .50 cents per $100 of valuation, the City didn’t have to consider your input by holding a “Public Hearing” about their proposal to raise Taxes.

You heard that right.

By staying just $1.00 under $500,000 limit, the City would be considered a “Small Taxing Unit”, which means that they didn’t have to listen to your input by holding public “Hearings” about their plan to dramatically increase the property tax rate and the resulting City budget.

To put it another way, if the City had added just a single $1 dollar, they would have hit $500,000 limit and they would no longer be a “Small Taxing Unit”.

This would have increased their obligations related to how they were expected under the law to post notices as well as to hold meetings and hearings during the process of raising our property taxes.

One:
By Staying a “Small Taxing Unit”, the City can lock in a massive tax rate hike and future the revenue that will follow – that never has to go away.

Two:
By staying a “Small Taxing Unit”, the law didn’t require the City to hold hearings when raising the tax in the first place.

Three?:
Could keeping the status of “Small Taxing Unit have been a great way to keep us from being more fully involved in the City’s apparently pre-planned process this year?

Considering the massive tax increase of over 138% that the City was planning, didn’t we deserve better communication on the matter?

If you ask the City Secretary, the answer is no. As she said it, the city didn’t have to call the meeting a hearing – it was just a meeting because we are a “Small Taxing Unit”.

I don’t know about you, but when I hear that there is a “meeting”, I don’t expect that it is really going to go over the same things as in a “Hearing” – that’s because it’s being called a “meeting”, not a “Hearing”.

From now on, I’ll know better.

Thanks for the hard-learned lesson, City administration.

I guess this type of “sleight of hand”, as demonstrated by the current administration and City Council, is the exact reason that I’ve committed to video each meeting and present them on this website so that we will all be able to stay informed as to our city’s actions and activities.

Remember, throughout this process, the City has confused us all by actually reporting FOUR different incorrect percentages for their proposed tax rate increase instead of the one that it actually is.

138.36% is the actual rate of increase of projected revenue this year over and above last year’s revenue that was stated on the City’s Proposed Budget.

It is NOT 58.05% , which was the misleadingly incorrect rate presented most recently – and at the last minute – by the City on the City’s Proposed Budget!

In the case of how the City planned and implemented the recent tax increase, many have found that the City was neither ethical nor transparent. When citizen voters showed up to oppose the huge 138.36% increase in their property taxes, our elected representatives didn’t really listen to them. Instead they simply and universally dismissed the citizens’ concerns as they followed their apparently predetermined agenda, with some City Council members openly showing smugness and even disdain to those that would dare to challenge their plan.

People are seeing a disconcerting level of disregard and even indifference to the wishes of the community as well as for their concern about the impact that such a huge tax increase will mean to their personal finances. I’m hearing people ask just what our elected representatives think of us – the actual voters. Do we even have a say – a voice?

Some of the issues, unanswered questions, and calculation failures may be blamed on simple administrative errors or oversight. But, people are asking whether there’s more to it – even asking if there is an agenda that is playing out behind the secure doors at City Hall, and possibly intended to keep us uninformed.

I love our city – just like the rest of us that live here. So, please know here and now that I have no reason to be against our fair community. I just want the City of Simonton – OUR city – to be run ethically and transparently by those that we have entrusted with the authority to do so. Their service is to be on our behalf and for our benefit.

I applaud the determined and committed citizens who came to each of the City Council “Meetings” to voice their opinions so directly. It is not easy to take a firm position and challenge your city leadership in front of your friends, neighbors, and others in the community – especially when their opinions might not be very popular with others. At the end of the day, and at least for that moment, each of these community-minded individuals represented the entire community and should be proud of their efforts.

At the end of the day, the City’s approach to “hearing” from the citizens of Simonton and appearing to care about the impacts to their families seems to have been just a sad municipal “dog and pony show”.